With shops re-opening and a range of retailers online, there’s still time to get that special model bus in time for Christmas. The range of new models is more limited this year as production capacity in China experienced the early impact of the pandemic and demand has been high for those releases that have reached the UK.

David Cole gives a roundup of the latest releases from the model manufacturers.

Three new variations of the NMC casting based on the ADL Enviro400 MMC have arrived in the UK during the pandemic, two of them representing Stagecoach Gold liveried vehicles operating with Stagecoach South (Route 1 Aldershot) and Stagecoach Oxford (Route 7 Woodstock). The third livery featured is the blue and silver of Ensign Bus’ operational fleet with a Private Hire destination.

The first NMC interpretation of a casting from the previous CMNL range features the partial open top Alexander ALX400 bodied Dennis Trident. Both initial releases are Stagecoach vehicles, a London Megasightseeing example and the North West ‘White Lady’ operated in the Lake District and finished in the style used by predecessor company Ribble for its double-deck coaches. 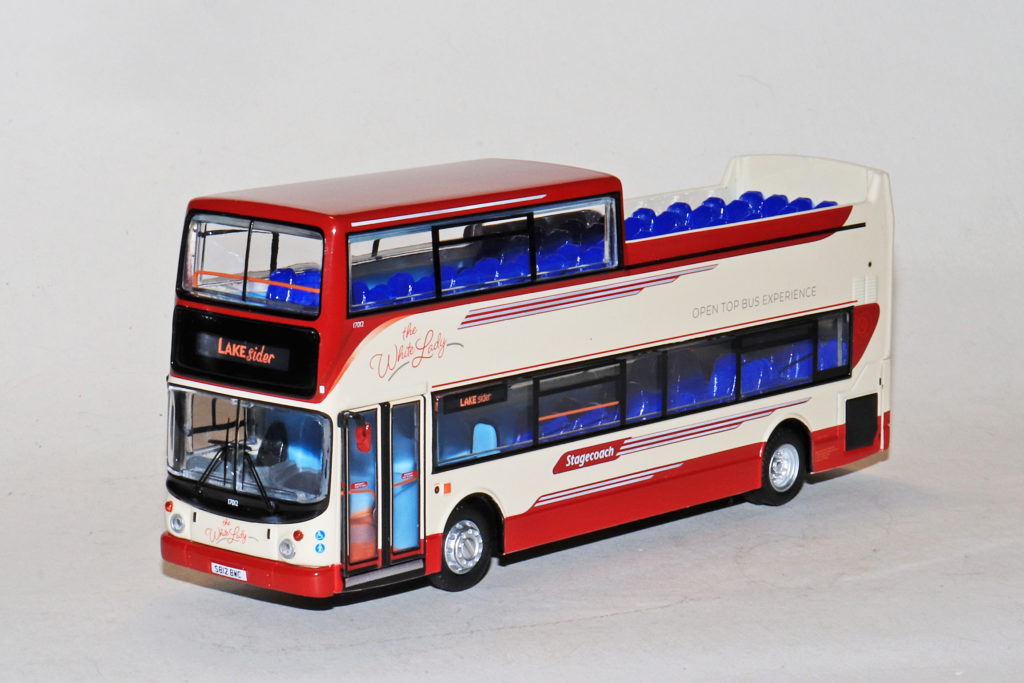 For 2021, NMC have further Enviro400 MMC liveries in production with that of National Express’ Xplore Dundee fleet expected in the UK imminently. The manufacturer announced early in 2020 that the City version of the Enviro400 will be the next new tooling. This is intended to represent both the Euro VI ADL diesel and the electric vehicles on BYD chassis. 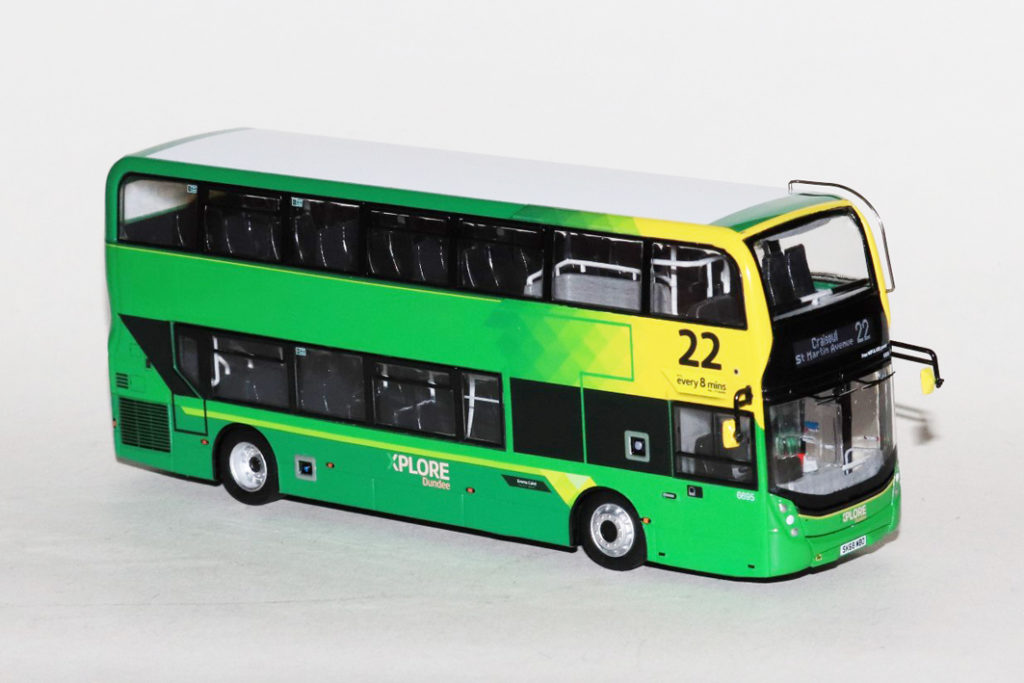 The first examples of Northcord Model Company’s latest ADL Enviro400 MMC model in Xplore Dundee colours have now arrived in the UK. The main delivery is expected early in 2021.

Oxford Diecast’s overall release programme has been significantly impacted during the pandemic although most of the pre-announced bus and coach releases for 2020 are now available. These include the Duple Commander II in Greenslades colours and the Beadle Integral as Thornes of Bubwith’s former Maidstone and District vehicle plus the first of two east midland themed Saro bodied single-deckers, featuring Trent’s red and cream livery. The second is the first new livery application advised for 2021 and will be in the early 1950s biscuit and chocolate East Midlands colours. The Mexborough and Swinton Leyland Royal Tiger and West Yorkshire Bristol MW coach remain outstanding from the 2020 programme. 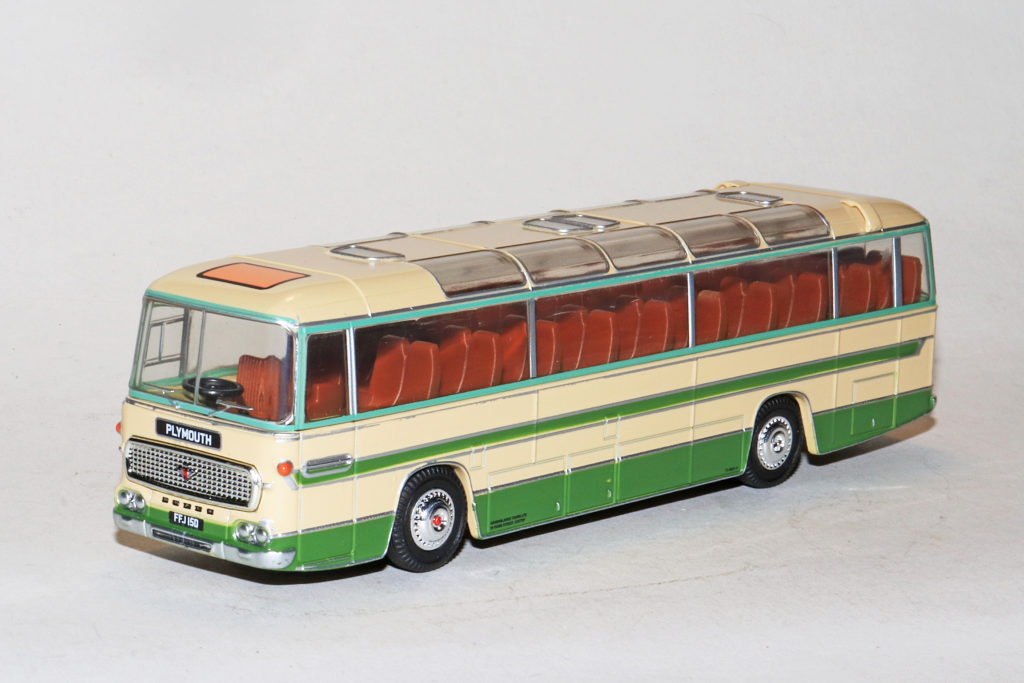 OOC’s releases of the New Routemaster casting continue to be popular and in 2020 it has appeared in advertising liveries for Coca-Cola and The Kraken. The latter, for a brand of rum, sold out rapidly at wholesale level but may still be available from some retailers. The traditional Routemaster has appeared in a bright yellow livery representing a route 88 vehicle carrying a short lived 1974 all-over advert for the French town of Boulogne, ‘The motorway to Europe.’ The Wrightbus Eclipse Gemini 2 double-decker has appeared as a Brighton and Hove vehicle carrying ‘The Snowman’ advertising for the Chestnut Tree House Children’s Hospice. 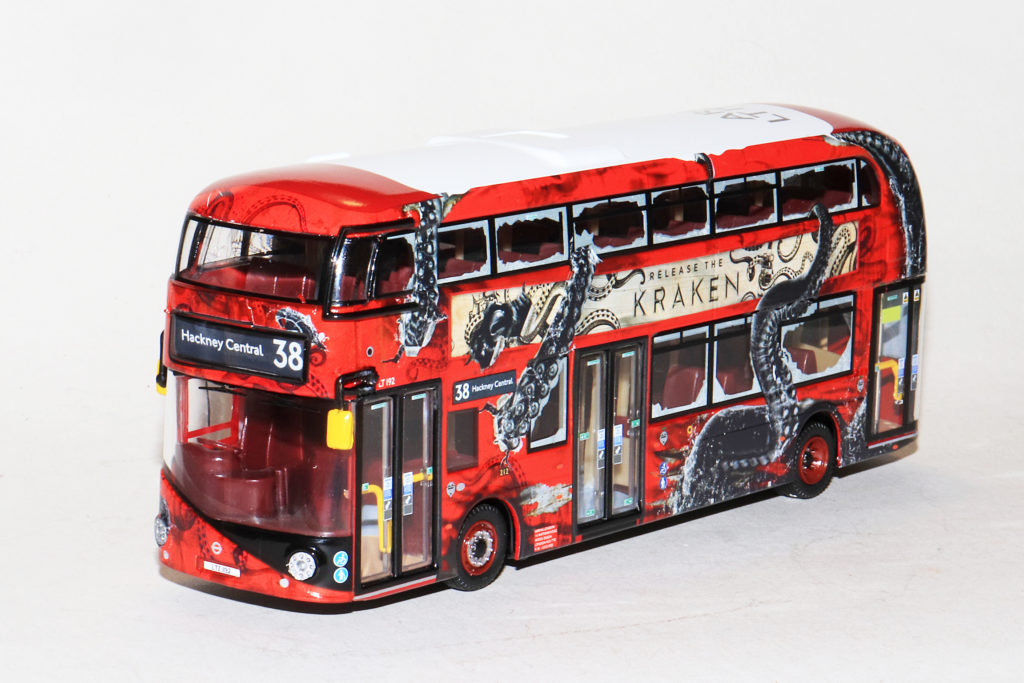 OOC’s latest release of the New Routemaster features an Arriva operated route 38 vehicle carrying advertising for Kraken rum. Building on the legends associated with the brand, the vehicle appears to be entwined by a mythical sea creature attempting to reclaim a shipment of rum

Corgi has also expanded its range of media related products using both OOC and souvenir model castings. The OOC Plaxton Panorama forms the basis of vehicles featured in TV’s ‘Only Fools and Horses’ and The Beatles’ ‘Magical Mystery Tour’ film while various The Beatles’ albums feature on a series of souvenir Routemaster models. The centenary of OOC’s parent Hornby company has been marked with the release of an OOC Bristol Lodekka FS in a red souvenir livery.

Although no new releases have appeared in 2020, Bachmann have confirmed that development work is continuing on new tooling for 2021. Illustrations of engineering samples for the open-top ‘Sea Dog’ Leyland Atlantean were published in the latest edition of the manufacturer’s club publication ‘Bachmann Times’ alongside an update on progress with the Northern Counties bodied Leyland Olympian and the Cravens RT.

Emphasising the international appeal of the traditional London Routemaster, one of Germany’s leading manufacturers of high-quality plastic models, Brekina, has just released the type in 1:87th scale. Representing the standard 64 seat RM, it will be available through dealers in the UK in both red and green London Transport colour schemes.

After the success of their highly detailed Birmingham City Transport Guy Arab model in 2019, Canada based Rapido Trains has just announced the setting up of its own UK business to directly market their products. In 2021, the company intends to release a further selection of destinations on the Guy in Birmingham City Transport and WMPTE colours. These will be accompanied by the first examples of their WMPTE standard Leyland Fleetline-MCW model where a selection of 20 routes from across the West Midlands will initially be offered.

Omnidekkamodels.com has commissioned two versions of Britbus’ Scania based East Lancs Omnidekka. The first, a Go Ahead London – Docklands Buses vehicle has recently been released with two destination options on route 425. Due in 2021 is a Bluestar, Southampton version. Omnidekkamodels has also commissioned a London red Quality Line Optare Solo from OOC for delivery in 2021.