“Evolution not revolution” at CPT

Last week, Bus and Coach Buyer revealed the CPT proposals it has put out to its members pending a review of its structure (see B&CB 1504, 2 November 2018). B&CB had an exclusive conversation with Martin Dean, CPT President and Peter Gomersal, CPT Interim Chief Executive, at last week’s Euro Bus Expo about these changes.

A proposed change in the restructure that Martin wanted to emphasise is the formulation of an External Relations unit. Four members of CPT staff are planned to work in this department. Martin said: “The idea with this is to make sure we are prominently getting our message across.”

Peter said: “Quiet diplomacy may have worked in the past, but CPT needs to lead the debate. We want CPT to be more robust.” 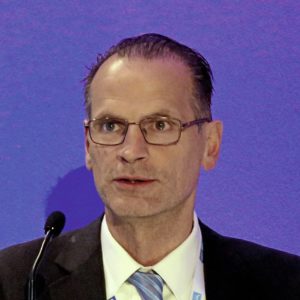 Martin added: “But don’t think we’re saying we are going to be shouting from the rooftops all the time, because people will get irritated with that. If you look at the problem of electric supply for the industry for the roll-out of electric vehicles, then we need to understand the electric supply industry. We need to find the way forward; we need an industrial strategy, not just about shouting from the rooftops.

“Our new External Relations unit is to concentrate on those issues. And the new Chief Executive is to set the agenda for that. About 95% of his or her time will be spent on working out how they will position bus and coach to the wider industry. They will be less bogged down in the day to day running of the organisation.

“And it is bus and coach we are promoting, not just bus. Coaches are somewhat a hidden gem, quietly doing an efficient job.”

Peter said: “We are focusing on being proactive, not reactive. We are being evolutionary, rather than revolutionary to make sure CPT is fit for the future.

“We’ve had great feedback about it. Members want the industry’s voice to be more robust. What we want to come across loud and clear is we are aiming to help the industry in this new structure.”

Martin emphasised the regional structures are due to go unchanged and he noted how cherished the support services, such as the 24/7 crisis control and compliance manual, are to members.

One change is planned in terms of the way it communicates with members. Peter said: “We are planning to run more webinar sessions. We had the first one last month, with Backhouse Jones. We had good feedback on it. You can sit in the office at 12pm and tune in. The Transport Manager and Operations Manager can watch too, when normally they couldn’t afford to take three people out of the business. We will do more of those, but we don’t want to evade the opportunity to network in person. It’s all about managing and balancing.”

Peter suggested there could be changes to staff numbers at the organisation as part of the restructuring.

The proposed changes sent out to CPT members mentioned the organisation is to stay in its Chancery House headquarters in London until 2021, after which there will be a review on whether it will stay there. On how likely it is to move, Martin said: “It is a hot topic of debate. Central London offices are expensive, but it does have good transport links. We might need a small team in London.”

As to who it will employ as Chief Executive, Martin said: “There are some good people in the industry that could do it. but they might be sourced from outside the industry. They have got to be able to engage with people. If we move forward with the way we are expecting, they should come onboard with us by the middle of next year. We are keen to get the right person in.

This isn’t about saving money.

It’s much more important than that.”

Martin and Peter are about to embark on a tour of the UK to discuss the proposed changes in support of the consultation document. The series of events is intended to help CPT members formulate their responses to the consultation. They are due to take place at:

Email: [email protected] to register your interest in attending one of the events.